In this post I am going to walk through the northbound frame flows in the Cisco UCS system. Hopefully this information will help you better understand UCS networking.

In other posts I will walk through the southbound and maybe east-west frame flows. I am breaking the posts down into multiple posts to make it easier for the reader to get through and understand.

I learned most of the information in this post from the Cisco Live 2010 session “Network Redundancy and Load Balancing Designs for UCS Blade Servers” presented by Sean McGee of Cisco. Some of the diagrams in this post were also taken from that same session.

FEX – Fabric Extender 2104XP that lives in the chassis. There are usually two of these per chassis, one for Fabric A and on for Fabric B.

FI = Fabric Interconnect, the 6120s/6140s. Usually deployed as a pair in an HA configuration.

IOM – I/O Module, another name for the FEX.

First lets take a look at the physical components within the UCS System. Below is a logical and physical diagram of the components that make up UCS. 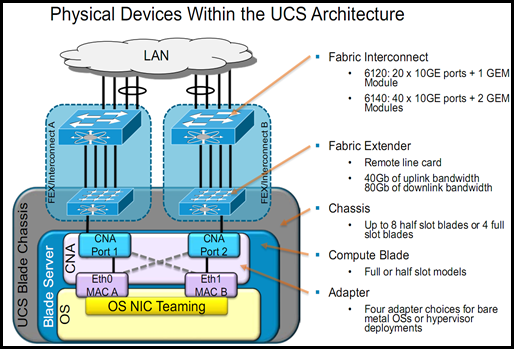 Now lets take a look at northbound frame flows. The following diagram lists the decision points that take place as the frame travels from the OS up through and out of UCS to the LAN. 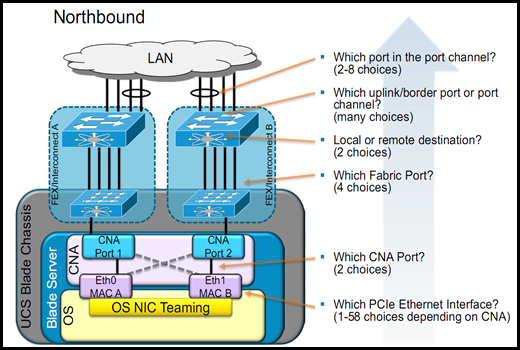 First we will start with the northbound traffic leaving from the Operating System.

After the frame has entered the physical mezzanine CNA another decision must be made as to which one of the 2 physical CNA ports are used to send the frame to the FEX. This decision depends on how the vNIC was configured in UCSM. When configured a vNIC as part of a Service Profile in UCSM you must choose which fabric to place this vNIC on (A or B) and whether or not Fabric Failover is enabled. The screen shot below shows these configuration options. 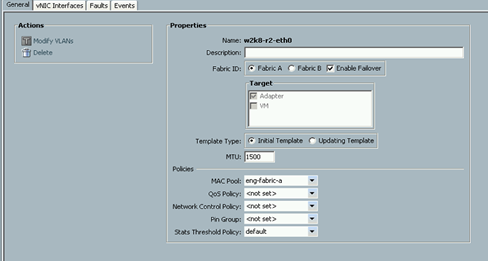 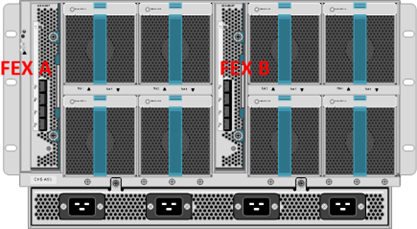 The back-end FEX port that the frame goes across depends on which blade this particular OS is running on. In our example we will say blade 3. There is a blade CNA port to FEX back-end port pinning that happens. For blade 3 CNA 1 the back-end FEX port will be port 3 or Eth1/1/3.

Below is a screen shot of the output of the cmd “show platform software redwood sts”. This command must be executed from the fex-1# context. To get here from the UCSM cli prompt first type “connect local-mgmt” then “ucs-A(local-mgmt)# connect iom 1” The 1 in this cmd is the chassis number. 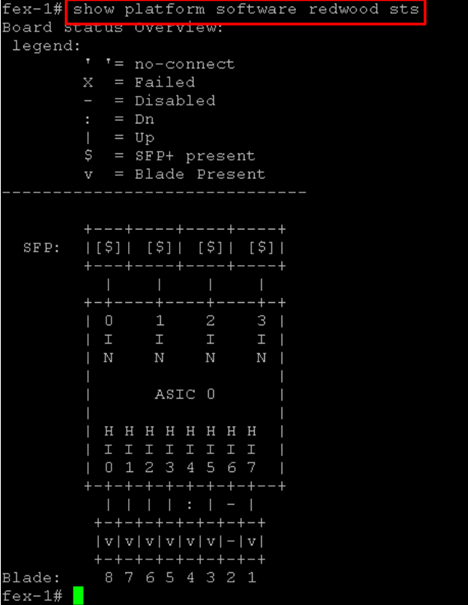 Once the frame is in the FEX it has to be forwarded to the Fabric Interconnect across one of the 4 front-end 10GE SFP+ ports. The port the frame goes across depends on how many FEX to Fabric Interconnect cables are connected and which blade it originally came from. There is a blade to IOM uplink pinning that happens based on the number of uplinked SFP+ ports. This pinning is not user controllable.

Here is a table and diagram showing how the pinning works in the three different uplink options. 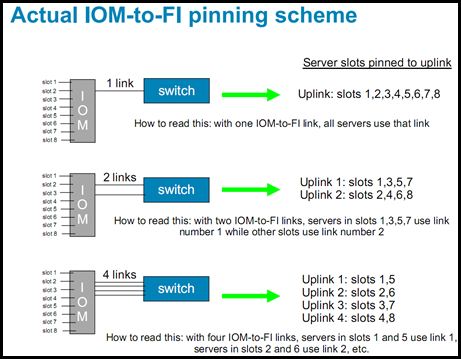 For our example there are 4 IOM-FI uplinks.

So to summarize the path the frame has traveled up to this point.

The next step is for Fabric Interconnect A to forward this frame to a northbound L2 LAN switch. Before this can happen the FI has to determine which northbound Ethernet port to send it out of. This decision process is as follows

If there are no LAN Pin Groups or Port Channels then automatic pinning is used in a round robin fashion. If there are 8 blades in the chassis and 4 northbound Ethernet uplinks then there will be 2 blades pinned to each uplink. This works in much the same way the default VMware vSwitch teaming works if you familiar with that.

So I think that about covers the northbound Ethernet frame flows. I stated earlier I will be posting the corresponding south, west and east flows in follow on posts.

Cisco UCS firmware 1.3 was released last week. There are lots of new features in this latest update and Dave Alexander (ucs_dave) outlined most of those in his blog post – http://www.unifiedcomputingblog.com/?p=151

What I will be covering here are the features that Dave didn’t cover nor were they mentioned in the release notes for 1.3 – http://www.cisco.com/en/US/docs/unified_computing/ucs/release/notes/ucs_22863.html

The feature I was most excited about was the advanced BIOS settings control from the Service Profile.

I updated our UCS lab this morning and on the the first login to UCSM after I finished the update I was surprised to see the Fabric Interconnects now have listed in their name what their current cluster role is. Before you had to drill down into each one to see this. 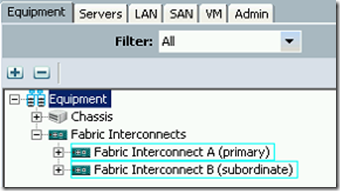 The next change I noticed was that the BMC had been renamed to CIMC (Cisco Integrated Management Controller). I personally like the new name better because I think it makes more since than BMC.

I was then looking around in the Admin tab and noticed a new section labeled Capability Catalog. The UCSM GUI Configuration Guide for 1.3 states this about the catalog

“The capability catalog is a set of tunable parameters, strings, and rules. Cisco UCS Manager uses the catalog to update the display and configurability of components such as newly qualified DIMMs and disk drives for servers.”

The catalog also has an Update Catalog function that can be used to update as Cisco updates it. 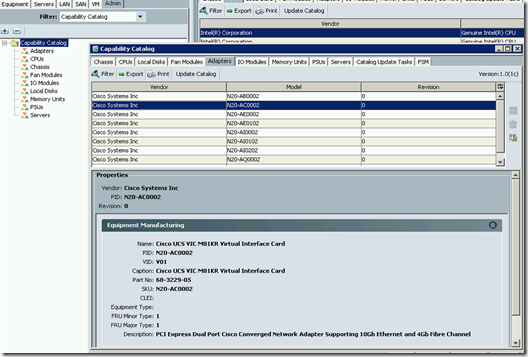 On the VM tab there is a new “Configure VMware Integration” wizard to assist in configuring VN-Link in hardware. (this requires the VIC adapter in the server blades and VEM installed on the ESX hosts) 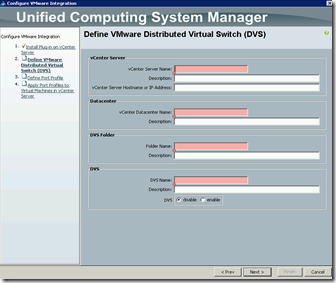 Here are a few screen shots of the new BIOS settings that can be configured. These new settings are implemented via a BIOS Policy that is then tied to a Service Profile or Service Profile Template. 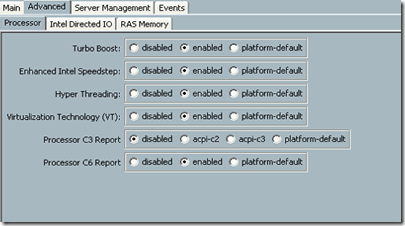 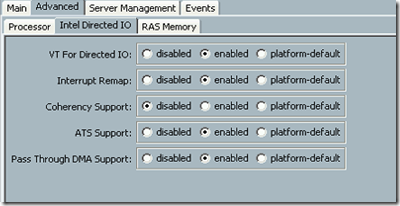 I am sure there may be a few more hidden gems in here but these are the ones I have noticed so far.

As stated in my previous post one of the use cases for Server Pools is in the server farm model where you have varying amounts of RAM and CPUs in your blades and and you want a way to efficiently deploy a farm of web server, ESX hosts and database servers without having to specifically choose a server blade.

The first step is to create a Server Pool. To do this go to the Servers tab, Pools. 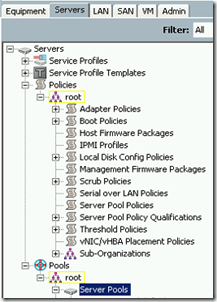 Right-click on Server Pools to create a new pool 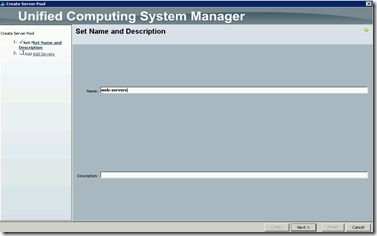 On the add server page temporarily add a blade and then remove it. If you don’t do this the Finish button stays grayed out. This is one of the UCSM nuances. 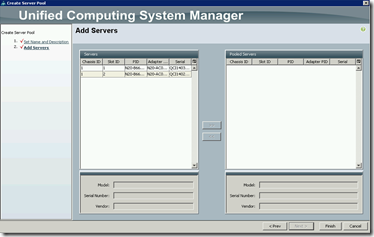 The next step is to create a Server Pool Policy Qualification 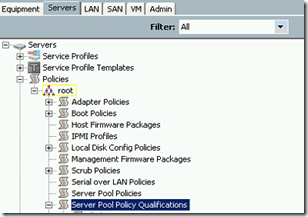 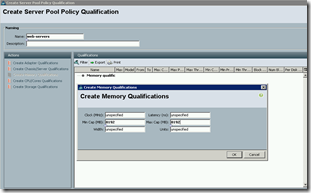 Now to tie it all together with a Server Pool Policy 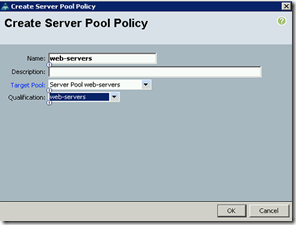 To use this new auto-populating Server Pool associate a Service Profile Template to is so that when you deploy new Service Profiles from the template you don’t have to select a blade, it will be automatically selected if there is one available in the associated pool.

One important note is that if your blades have already been discovered you will need to re-acknowledge them before they will be added to a server pool.

Another important note is that if you re-acknowledge a blade it will reboot it without asking so you probably only want to re-acknowledge blades that are not associated with a Service Profile.

Cisco UCS Server pools are one of the more mysterious features of UCS. I say mysterious because in my opinion the usage and configuration of them is not very intuitive. Let’s start with Cisco’s definition of a Server Pool, this definition was copied from the Cisco UCS Manager GUI Configuration Guide, Release 1.2(1) found here – http://www.cisco.com/en/US/products/ps10281/products_installation_and_configuration_guides_list.html

“A server pool contains a set of servers. These servers typically share the same characteristics. Those characteristics can be their location in the chassis, or an attribute such as server type, amount of memory,local storage, type of CPU, or local drive configuration.”

You are probably thinking that doesn’t sound very mysterious and you are right it doesn’t until you start digging into the use cases and configuration of Server Pools.

Here are some characteristics of a Server Pool:

Server Farm Model – In this model you have an environment made up of varying applications that have varying hardware requirements.

Rapid Deployments – This would be a new UCS implementation where you are wanting to deploy new blades as fast and efficiently as possible without have to select specific blades to associate Service Profiles with.