I was doing some reading this morning on the new MDS 9710 Director Class switch and came across a feature I hadn’t heard of before. The feature is called “Smart Zoning” and is a real godsend for SAN and data center administrators.

Traditionally SAN admins that follow best practices follow the “single initiator”, “single target” rule for zoning FC fabrics. There are a couple reasons why this is a best practice:

With Smart Zoning a host will only need a single zone in each fabric instead of the typical 2-4 zones per fabric. The number of zones a host needs depends on how many SAN front-end ports the host needs access to.

Take for example 10 Cisco UCS ESXi hosts that need to access LUNs on an EMC VNX 5500.

Typically this configuration would look something like this for a single host. Multiple this out for 10 hosts and you have 40 zones needed in each FC fabric.

With Smart Zoning the configuration would look like this. Note the keyword target or init after the device-alias name. The number of ACEs consumed in the TCAM is the same but the administrative effort is dramatically reduced. The number of zones needed in each fabric goes from 40 to just 10.

There are some requirements for Smart Zoning that should be verified before trying to use this feature: 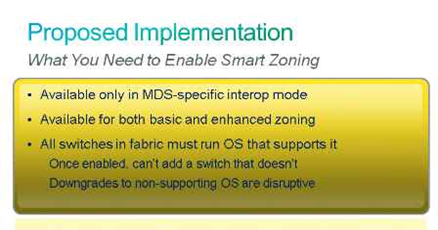 To enable the feature: